An ethic of humanity caring

From the discipline of apithology comes the means and method of caring for a small humanity.

It makes some comforting sense really, that in having a theory of childhood development and understanding patterns of progression in adult morality, that we might also one day discover an ethic of humanity enablement.

‘What is an apithology ethic for humanity caring?’

A possible source of origin of an apithology ethic comes from psychologist, Erik Erickson (1902-1994). From his work there is the inspiration to consider and dwell on an ethic of generative caring. In Erikson’s lecture ‘A Schedule of Virtues’ (1964) the challenge is phrased:

“It is obvious, however, that man must now learn to accept the responsibility which evolution and history have given him, and must learn to guide and playfully restrain his capacity for unlimited propagation, invention and expansion.’ (p. 131-132) 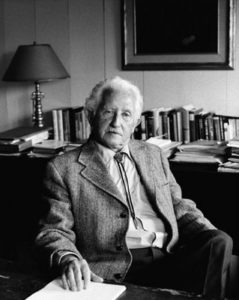 In recognising the development of the individual beyond the ego needs of industry and identity (being two of the stages of Erikson’s psycho-social model for development), Erikson envisaged a need (if not a time) where a generativist ethic would become paramount.

He concludes his later essay on ‘Evolution and Ego’ (Erikson, 1964) by writing:

“Where do we stand? – In our time, for the first time, one human species can be envisaged, with one common technology on one globe and some surrounding “outer space”. The nature of history is about to change. It cannot continue to be the record of high accomplishments in dominant civilizations, and of their disappearance and replacement. Joint survival demands that man visualize new ethical alternatives fit for newly developing as well as over-developed systems and identities. A more universal standard of perfection will mediate more realistically between man’s inner and outer worlds than did the compromises resulting from the reign of moral absolutes; it will acknowledge the responsibility of each individual for the potentialities of all generations and of all generations for each individual, and this in a more informed manner than has been possible in past systems of ethics.” (p. 156-157)

This idea that there is a responsibility to care for the potentialities of generations is similar to, and leads to, the idea in apithology theory of the care for ‘generative potentials’ (particularly as they appear in a humanity).

The principle motif that guides apithology praxis in the role of humanity caring is the idea of ‘generative potentials’ (Varey, 2015). This foundational concept proposes that there is something to be attentive to. It asks us to care for that which is beyond our present action and imagination. It also invites a discovery of what ‘being in contribution’ means as a present member of a future humanity. This question is as vast, as the invitation is continually open.

In an exceedingly rare reference to an envisaged future field, psychologist Erik Erikson (1966)  wrote this concluding passage in his biographical analysis of Mahatma Gandhi, being one of the earliest mentions of the concept of ‘generative potentials’ in context:

“Since the days of my youth Gandhi’s “presence” has appeared to me to have been of a quality rarest among men. But my testamental attitude has now become bound to a field and a method. The  psychoanalytic method itself demands that we learn to proceed from the case history to the life history, from the symptoms of human conflict, to the signs of human strength, from man’s adaptive and defensive maneuvers to his generative potentials. Historical reinterpretation has always been thus bound to mood and method, but a certain discipline of self-awareness may yet make a difference.” (p. 646)

In this passage Erikson is evoking an apithology-like inquiry, looking to a ‘horizonal’ shift from symptoms of pathology – to ‘signs of human strength’, potentially moving our gaze from individual psychoanalysis to the idea of collective health, marking a new phase in humanity’s life history (Erikson, 1978).

The difference is made by our self-aware reflectiveness, beyond (and in extension of) our lineages of conceptualization. From Gandhi’s inspiration, we are led into the idea of a generativist ethic, as a humanitarian consideration.

Given the concept of ‘humanity caring’, and the idea in ‘generative potentials’, being that there is something to ‘care for’, where might we look for a statement of what an ethic of humanity care might involve?

For apithology, the humanity caring ethic is stated as: “Enable all to enable all.” To understand this requirement, we can take inspiration from Erikson’s own advancement of perhaps his greatest innovation, seen here is his early pronouncement of a ‘generativist ethic’:

“As to our developmental insights, generative ethics would suggest some such new version of the Golden Rule as: Do unto another what will advance the other’s growth even as it advances your own.” (p. 93)

This ethical sentiment is likewise expressed by Erikson (1964) as: 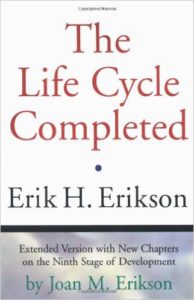 This idea is summarised as the ethical maxim: ‘it is best to do to another what will strengthen you even as it will strengthen him – that is, what will develop his best potentials even as it develops your own.’ (Erikson, 1964, p. 233) and recapitulated by him as protecting: ‘those basic mutualities in which a partner’s potency and potentialities are activated even as he activates the other’s potency and potentialities.’ (p. 234).

The essence of what is advanced by Erikson is a concept of ‘generative mutuality’. This is not the advancement of one generation over another, or the generative gain of one being over all others. Rather, what is envisaged is a caring across ages, stages and conditions of development, where each phase of development of each person, enhances that of all others that it may impact upon.

At this point we are approaching an idea similar to the apithology ethic of the ‘health of the whole’, where not only healthy expressions are supported, but these are considered virtuous by their nurturance of all other nurturances. The key feature of a theory of ‘generative ethics’ must be that the expressions of earlier potentials are not considered developmentally lacking by some elevation of priority of contemporary norms over the previously nascent.

This is important, as in the milieu of our times we do not know if our own expression is any more (or less) ethical, only that it appears to us (presently) as being more vitally moral. To know its virtue, is to consider its contribution, to the generativity of all other potentialities. In this we can be honest, if we are reflective in our considerations of all.

The challenge: Instead of advancing a humane position, on what to care for, might we inquire into and invite a proposition as to what humanity caring asks for?

This leads us into the idea that we must study what enables all potentialities, and in particular those for which we have a mutual dependency. In the (extremely brief) essay ‘Ethos and Ethics’, Erickson (1997) proposes a tripartite distinction between ethos, ethics and morals. Significantly, he also proposes an ethical levels of maturity model, where virtue is found in ‘an ethical sense consonant with the generative engagements of that stage’ (p. 93).

The features that makes this description unique and pioneering is to see an early form of a humanity ethic in trichotomous developmental terms, where earlier moralities from prior life-stages, form part of, and are informed by, the ethical considerations of later life stages by their coherence. This is an ecological caring for the entirety of humanity’s generative in a linked process of potential and actualization.

“Therefore, continuing moral or ideological modes of thought in the ethical position are by no means “infantile” or “juvenile” left overs, as long as they retain the potential for becoming integrated parts of a certain generative maturity within the historical relativity of the times.” (p. 94)

The embracing of the complexity of the intricacy of the ecology of humanity’s expressions means a humanity ethic is not proposed from one vantage point, but rather it is expressed as the enablement of all advantages.

In The Life Cycle Completed (1997) Erik and Joan Erikson explain how at the latest moment in a developmental transition a ‘meaningful crisis’ can lead to a new ethical stage finding critical dominance within the developing personality.

In the shift into the adult life-stage holding the virtue of ‘Care’, we learn to ‘take care of’ the persons, products and ideas we have ‘learned to care for’ (p. 67). This is the leap into the balancing of tensions between generativity and stagnation. It occurs when our engaged human industry, has provided an opportunity for humanity identity, and in having developed an intimacy with humanity, the next life stage quest is to develop a generativity ethic in a human caring.

In an enactment of this ethic, we may potentially avoid (individually) a crisis of stagnation of the identity, avoiding becoming adults focussed on mere ‘self-absorbed repetition’ as if being an ‘only-child’ with selfish needs. At the scale of humanity, the enactment of this wider caring leads to the ‘wisdom’ to develop in integrity, allowing for our membership of a humanity, with one in-common realisable destiny.

The question that apithology asks is why leave the transition from caring adulthood to mature wisdom to chance? Would we not assist the formation of industry and identity towards a caring for a future humanity? To the extent we believe we already do this, what is the basis that informs our choice of morality other than a personal preference? As really, how can we know human pathology, without a theory of humanity apithology?

Is this ethic of humanity caring an easy path of clear moral choice? Happily, no!

I find great comfort in the reading of balance in the Erikson model, placed there by himself. There is the acknowledgement of the ‘syntonic’ and ‘dystonic’ tensions both being needed,  with their balance operating as a healthy premise for developmental formation. Erikson states (1997): ‘In either case, it is important to remember that conflict and tension are sources of growth, strength and commitment.’ (p. 106).

For development to occur there is a need for a tension of expression in both polarities. Erikson’s position was for an equality of human expressions, only with the ratio being in favour of the potential that enables other potentials, such that further development was ultimately possible (Evans, 1964). This proposes an ethic, not of extremes or of negation, only of transitions through which we may benefit from a guided navigation and enabled integrations. 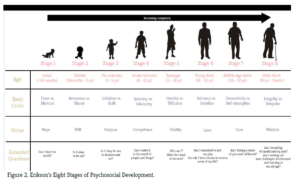 The practice of apithology asks of us a lot, but in exchange it makes available a vast amount, always sufficient to make the inquiry worthwhile. The truth of the premise of an apithology ethic of care will be found in the experience of a ‘humanity of integrity’. This is not a fanciful scenario of peace, harmony and sanctity, but one of the real dilemmas of life resolving the existential tensions of caring (successfully); for oneself, what one cares for, and for the caring that enables all forms of caring to become possible.

Instead of being a utopian ideal, this is an envisaged practice of caring engagement, having at its center a nurturing regard for the generative potentials of all humanity, now present and in future formation.

Erikson, E. (1964) The Golden Rule in Light of the New Insight. In. ‘Insight and Responsibility’. W.W. Norton: New York.

Varey, W. (2015) ‘The Apithology of Humanity Psychology: Humanity as a Generative System’, Proceedings of the International Society for the Systems Sciences, Berlin, Germany.

← 5555 days of practice, and still learning
Traversing into Tagore →
© All Rights Reserved