I have been working recently on developing the integrating themes of the last decade of my research work and personal praxis.

As part of that process, I asked a number of peers and friends what they thought the contribution of continuity was, the principle that informed all of what I do, that I might carry forward over the next 40 years? There were some very complimentary (and humbling) responses. These included ideas such as:

One dear friend, a mentor, elder, sage, and a personal guide of great inspiration – then said:

“Well, Will its like that you ask a question that helps us, either to find whatever we are looking for, or something else, either a wisdom bigger than ourselves, or a challenge that we want to step into, but can’t quite yet find. People at this time can’t see the what they are searching for, they know it’s there, but dimly, so they grab onto something in the darkness and hold onto that instead. People are trying to be good, but there is a lack of reflection, illumination, in our decision spaces. What you are doing is different to what has been done before- it’s not a panacea, but a new way of being, that changes our actual way of asking, you act as a guide – a direction – a direction finding duck!”

At this point I let out a ‘quack’ and laughed – until I remembered the reference. The ‘direction finding duck‘ is a much loved character in the work of the national treasure who is cartoonist, Michael Leunig. The primary characters of inspiration are described thus:

“Frequently the duck appears as an observer, a gentle reminder of the purity and innocence of Nature; while the winged angel watches over and keeps us mindful of our own physical mortality. The moon and stars are frequent visitors; the moon, always the waning crescent, “hangs faithfully in the sky; constant companion, luminous and remote, gentle symbol of mystery, femininity and nocturnal wisdom. Mr. Curly, of the paradoxically named town of Curly Flat, is a happy and optimistic fellow. Everyone in Curly Flat has the curious cranial feature: “..the curl is the tender, unfurling motion of nature’s growth; the unfolding consciousness; the way in which the heart reaches out into the world”.  Mr. Curly often writes letters of wisdom to his friend Vasco Pyjama, who in “The Second Leunig” sets off on a voyage of discovery in his ‘amphibious club armchair’ accompanied, of course, by his faithful Direction Finding Duck (who always points towards new joys).” [ Source: www.curlyflat.net ]

I think, of all the offerings of descriptions, I would take this precious association first. It invites the gentle reminder of the purity of our human nature, our ongoing innocence and newly emerging wonderment (in our attempts at cleverness) and the continual finding of the new joys that lie just over the horizon of our own present seeing.

My appreciation for humanity, and our humaness, is as intensely practical as it is optimistic. Yet I feel my contribution is not merely a general well-wishing, delighting and hoping by positive affirmations  – as I have so many close friends with whom I engage daily in this way of being ~ its more in the simple and practical ideas, with humility, that enable humanity’s generative potentials as a very real possibility for all.

At last count, I had over 850 pages of 520,000 words written for six books (in addition to the 60+ existing articles) waiting for publication, with 1.475 million words and 3248 pages of notes of further detailed work, on over 225 modalities, with 4000+ artifacts from apithology dialogues remaining untapped.

The request that is coming through from colleagues is that now is the time to release some of this work, initially in community, and subsequently publicly – for its simple contribution to questions we might be asking, without knowing what we really want to be thinking. In this way, humanity might begin finding its way to different directions, differently.

Equipped with not more than this ‘direction finding duck’, I hope you will join me on this remarkable and unfolding journey. 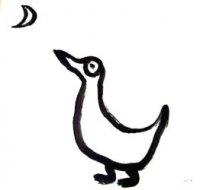 Only an idea could last this long … →
© All Rights Reserved